Following another success on the road last week at Preston the Colts returned to Broadwood for todays game, welcoming free scoring East Kilbride to Cumbernauld looking to extend their four game unbeaten run against second in the Lowland League table.

Skipper Ward and Oliver returned to the Colts defence in place of Benton and Grant, while Munn replaced the injured Barclay in central midfield. O'Neill returned to the starting line-up too, Tilley the man moving to the bench.

Both sides started brightly as the opening stages were contested mainly in the midfield area, both testing the man in the opposite goal with decent efforts from distance. Colts had the better of the early half chances but were unable to get anything clean on the visiting goal as the East Kilbride defence blocked at the last on a couple of occasions.

It was the men in yellow though who eventually did make the breakthrough, Duncan putting the East Kilbride man under pressure on half way and stealing the ball superbly. As the home side broke quickly they worked the ball to O'Neill who skipped beyond the covering central defender effortlessly to pick out the late run of Blair Munn on the edge of the area as the defence retreated. Munn slotted calmly into the bottom left hand corner of the net with his right from 16 yards.

A fine goal and a deserved lead for the side in the ascendancy.

George in the home goal was asked to make another save from distance, palming a left foot drive from 25 yards away to his left before Duncan made a fine interception in the area, blocking a first time effort on the volley from a cross from the Colts left.

Colts though were to have two excellent chances to extend their lead. Firstly Kirwan linked well with Broadfoot and Ballantyne to drive down the left flank away from two defenders, reaching the goal line and cutting back to Selkirk 8 yards out. Selkirk though lifted narrowly over the bar first time with his right.

Moments later Duncan played into the feet of Selkirk who dropped off first time to Broadfoot centrally, taking out 3 away players with his excellent touch. Broadfoot drove at the heart of the defence from half-way, Black making an excellent run from the left to bring the fullback narrow and allowing Ballantyne to slip round the outside of him. Broadfoot spotted what was happening and played into the path of Ballantyne who drove at goal with his left from 18 yards, the keeper making the save. An excellent move from the Colts, unfortunate not to bring a second goal.

At the other end Smith fired well wide from 25 yards under pressure from Oliver before Duncan showed great positional sense for a second time in the half, clearing away to safety from 6 yards as the East Kilbride wide man tried to latch onto another cross from the left.

O'Neill picked up a late booking for a foul on half-way as the visitors looked to break and the sides went in at the break 1-0, Colts deservedly in the lead as the better side over the course of the first 45.

Into the second half and the visitors came out strong, enjoying more possession than at any stage in the first but without really managing to create anything against the Colts defence. In fact, it was the home side who had another 3 excellent chances to extend their lead.

Ballantyne and Black between them won a corner on the Colts right and from the kick Broadfoot found the head of Selkirk who flashed across goal. The header landed quickly at the feet of Oliver who adjusted his run to volley first time with his left over the bar from 6 yards.

Next up Kirwan treated the home fans to one of his trade mark runs from fullback, gliding effortlessly past 3 men, one of whom clearly attempted to foul him, before driving into the box and curling wide with his right as the space opened up for him.

And finally it was Black as Selkirk and Broadfoot kept alive an O'Neill cross, Black latching onto the second headed knock-back into the area and heading wide from 4 yards under pressure, the keeper helpless had it been on target.

At this stage the Colts will have felt that they could and probably should have been at least a couple of goals to the good, the visitors looking to take advantage of still being in the game and creating a couple of excellent chances of their own.

First the league's top scorer Smith headed over from 6 yards when he'll feel he should have scored, before diverting a cross ball from the right away from goal when it looked a certain tap in. In between George in the home goal had taken a couple of crosses under pressure.

In the end though the result was determined by two decisions late in the game. The first was a penalty to the visitors as the ball was played to the back post from the right where the wide man knocked back into the danger area. As Ward looked to clear the attacker got a toe there first and the Colts skipper clipped him for a penalty. No complaints from the home side.

The visiting number 8, fortunate to still be on the park at that stage given earlier events, sent George the wrong way for 1-1.

But it wasn't over there as the Colts, feeling they deserved all three points, mounted a final attack deep into stoppage time, Ballantyne playing a wonderful through ball into Selkirk who took his touch away from the keeper on the left of the box, the diving stopper wiping him out with his outstretched arm.

Those in the stands and on the home bench expected the Colts to have a chance to win the game from the spot given how clear a penalty it appeared to everyone, including the visitors. Unfortunately, much to the frustration of the home side and quite unbelievably to everyone in attendance, no whistle was forthcoming.

Selkirk picked up a booking for enquiring as to why it wasn't a penalty before the fulltime whistle went at 1-1 and the Colts frustration was compounded by George being shown a red card for protesting the decision.

5 unbeaten in all competitions and the Colts will be encouraged by the performance, playing very well against a team considered title contenders and deserving more from the game than they got in the end. Missed chances cost them, the game could have been well out of sight before the visitors created their first chance of note in the second half.

That said, they should have at least had the chance to win it from the spot in stoppage time, instead they ended up with a booking and a red card. 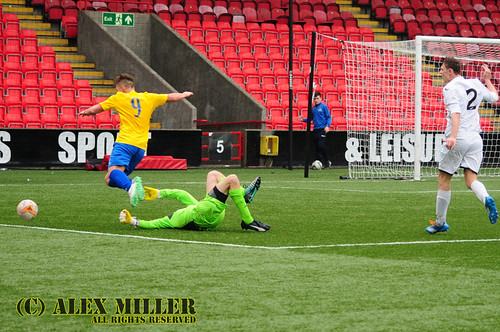